“Forecasts usually tell us more of the forecaster than of the future.” Warren Buffett

A forecast or prediction is a statement about the events, conditions or developments that are expected to happen in the future. The difference between a forecast and other statements about the future, e.g. prophecy, is that it is based on knowledge, derived scientifically.

Forecasts are central to practical economics. They are made, on the one hand, by economists and related to macro-measures of economic performance such as gross domestic product, inflation or population growth. On the other hand, financial analysts draw up forecasts about corporate developments, which they express in terms of changes in turnover and profit. Predictions can also be made about the development of market prices, e.g. about the price targets of shares, indices, currencies or interest rates. These are fundamentally very problematic, because they involve anticipating both economic events and the reaction of the players on the market to these events.

“Prediction is very difficult, especially about the future” is a popular quote, attributed to the Danish physicist Niels Bohr (although some claim that it was originally said by Mark Twain, Winston Churchill or Kurt Tucholsky). It states that it is basically impossible to predict the future because it is uncertain and we cannot know what it holds. For this reason, there is widespread scepticism about forecasts. And this scepticism is further fortified by economic predictions, as they frequently turn out to be completely wrong.

END_OF_DOCUMENT_TOKEN_TO_BE_REPLACED

Stock market price-earnings-ratios are nothing else like inverted earnings yields. They are regularly used to assess the valuation of equities as an asset class. If you apply the same methodology to bond markets, e.g. the German Bund market, it becomes clear how bubble-like valuations for bonds are right now.

European defensive sectors are back in favour

During the recent period of euphoria, stock markets neglected defensive sectors. These interrupted their relative outperformance trends. This, however, has changed in the recent weeks.

The risks of risk management

Risk management involves systematically identifying and evaluating risks as well as managing the response to the risks that have been identified. It is usually performed by specialised employees within a company and has become increasingly important since the 2008 financial crisis. Since the 1990s, the influence of risk management has grown gradually, in particular in financial companies, due to a rise in the number of legal and regulatory requirements. The financial crisis, in turn, triggered a growing internal acceptance of risk management within companies.

Nevertheless, the task of risk managers is practically impossible, particularly in the area of finance. On the one hand, their companies have to make money, which they can only do by taking risks. On the other hand, it is a risk manager’s job to limit or reduce these risks. And in doing so, he incurs costs or even prevents business from being generated, which tends to annoy the operational managers. And this tendency to prevent business can have a fatal economic impact, as the latest discussion about the credit crunch in southern Europe has revealed. When banks do not issue a sufficient amount of loans, they prevent the economy from rebounding.

END_OF_DOCUMENT_TOKEN_TO_BE_REPLACED

Quality shares, measured by the STOXX® Global Strong Quality 50, have resumed their outperformance vs. global equities. 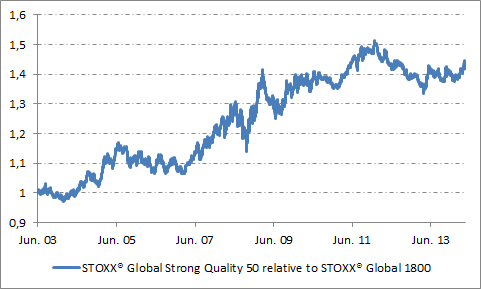 Adjusted for inflation, US Treasuries have mainly been a poor investment in the past.

From crisis to crisis