Home › Economics › The preposterous deflation scare Part I: How stable is price stability?

The preposterous deflation scare Part I: How stable is price stability?

Posted on August 19, 2014 by Karl-Heinz Thielmann — Leave a comment

For months now, we have been showered in a flood of press reports and comments by economists, warning us about the catastrophic effects of potential deflation. However, they never justify their statements to any great extent. As a rule, the authors make vague references to the world economic crisis in the 30s and Japan’s lost years in the 90s. There are only very few economists,  who find the warnings too superficial and do not support them.

But what is deflation and why is it supposedly so dangerous?

Deflation basically means that the purchasing power of money rises. It is the opposite of the generally widespread phenomenon of inflation; in other words, it is the decline in purchasing power of money. Economist are generally very nervous about deflation because, on the one hand, it puts pressure on the general level of prices in the context of an economic crisis. And, on the other hand, it can also lead to people hoarding their money and, as a result, withdrawing it from the economy. And this intensifies the crisis. For this reason, the so-called “deflation spiral” is the horror vision of all macro-economists — a situation in which the propensity to save and an economic crisis reinforce each other, ultimately resulting in economic collapse.

It is striking that the current debate about deflation incorporates three main points:

2)   Theoretical explanations for why low inflation rates and deflation are so dangerous.

3)   Empirical proof of when deflation really has been dangerous in the past.

These points will be explained in this text and subsequent articles.

Changes in the purchasing power of money are generally measured by a consumer price index. (This in itself is potentially problematic, but explaining why would go beyond the scope of the article. It is discussed for example in:)

Broadly speaking, inflation means an increase in the value of the consumer price index; deflation means a reduction. Then no change should surely be the equivalent of price stability, shouldn’t it?

Although this may seem logical, policy-makers have a different concept of price stability. At its website the ECB defines price stability as: “a year-on-year increase in the Harmonised Index of Consumer Prices (HICP) for the euro area of below 2%”. Accordingly, the goal of maintaining monetary stability is described as follows: “Indeed, the Governing Council aims to maintain inflation rates at levels below, but close to, 2% over the medium term.” 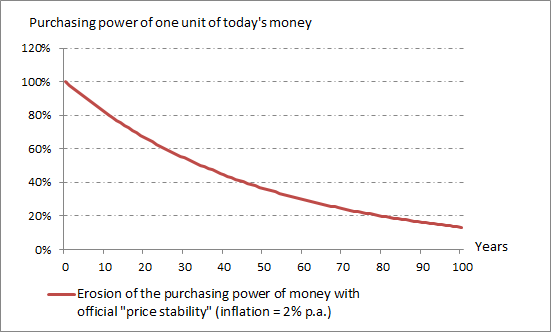 In Europe, there is currently a tendency towards declining rates of inflation, e.g., a rate of 0.9% p.a. in Germany at the moment. The HICP’s rate in the Euro area, which is used as a guideline by the ECB, is 0.4%. For this reason, many well-known economists — such as the IMF Chief Economist Blanchard — have started issuing warnings about the “dangers of deflation”.

Nevertheless, in actual fact, the risk of genuine deflation — i.e. an increase in purchasing power — is very remote. At the moment the danger of inflation is just not as high as is usually the case.

To be continued tomorrow.

“With a Steady Hand”
Welcome to the weblog of Karl-Heinz Thielmann, fund manager, financial analyst, economist and dedicated long-term investor.
%d bloggers like this: