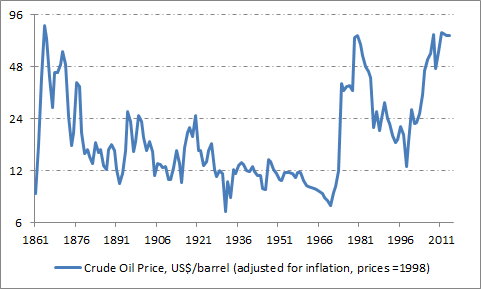 The supply side is strongly influenced by the OPEC, even if Non-OPEC countries become increasingly important as producers. OPEC still is able to use its market power to constrain the supply and keep prices high most of the time. Political instability in some producer nations also helps to keep supplies tight. On the other hand, user nations like the USA have large strategic oil reserves and are prepared to use them to counteract strong price increases. Therefore, in the medium term oil prices should be stuck around current levels.

As known reserves have already been exploited extensively, technical innovation will play a critical role to secure the future supply.  Advanced technologies like 3-D seismic imaging, horizontal drilling and multi-stage hydraulic fracturing, as well as improved production and transportation process control for deep-water projects will be critical to ensure future production. However, as these technologies are very costly, their use will depend on the expectation of sustained high oil prices

Without groundbreaking innovation in transportation technology, which may reduce the dependency on fossil fuels, oil prices will remain high.

“With a Steady Hand”
Welcome to the weblog of Karl-Heinz Thielmann, fund manager, financial analyst, economist and dedicated long-term investor.
%d bloggers like this: